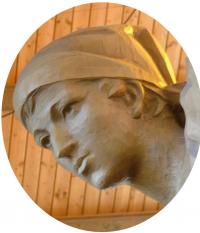 In many of the images of st. Angela, I am struck by the eyes of Angela. You know how they say that the eyes are the windows of the soul.  Well, I invite you to look into Angela’s eyes and see more clearly her soul.
Angela was a woman who lived with her EYES WIDE OPEN…

    As a young girl at her father’s knee she saw the heroic love of holy women and men in his stories
    She lived close to the earth in the beautiful Italian countryside
    She experienced close family love and then loss and sorrow
    She was attuned to nature… attuned to God… attuned to people
    Her life experiences taught her compassion
    She was acutely aware of & responsive to other people’s sorrows and needs
    Even when blinded on pilgrimage, she saw more than most and continued on…

I was reading recently about a meteorologist reacting to a hurricane.  He was eager to get to the beach to see the new shore.  His focus was not on disaster but on new creation.  I was immediately struck by the originality of that attitude.

When I lived in Alexander Valley, I remember how at the beginning of each summer I’d go down to the Russian River to check out the beach.  Each year I could have one of two different attitudes:
1.    I could whine and lament about how the current had changed and there were no more rapids, how there was more gravel than sand, how…
2.    Or I could rejoice in the new beach that this summer brought, and I could enjoy that new reality and look forward to another new reality next summer.

I think that Angela had such clear sight that she could see things differently. She could see different possibilities for the women of her time.  She could envision a new religious life lived among the people.  She did not lament over the past or even the present, but she looked to the future and what could be.

Maybe Angela’s time of blindness when she was on pilgrimage even helped her to see in new ways, to look within, to stay focused on what was really important.  Maybe that blindness helped her to pay closer attention to reality and to what could be, to see things in a different light.

We too need to see clearly, to see “outside the box” in order to create a new world, a better reality.   In this imperfect world, there is much that needs change.  Angela models for us that the way to make changes in the world is to keep our focus on God and see the possibilities!

Angela was a WOMAN WITH HER EYES WIDE OPEN.  I invite you to open your eyes and meet again our mother Angela.   Open your eyes that you might see more clearly how to create new realities in our world. 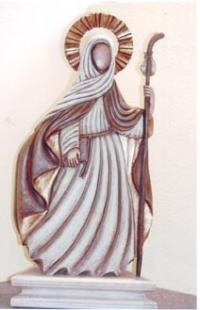 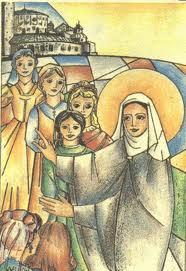